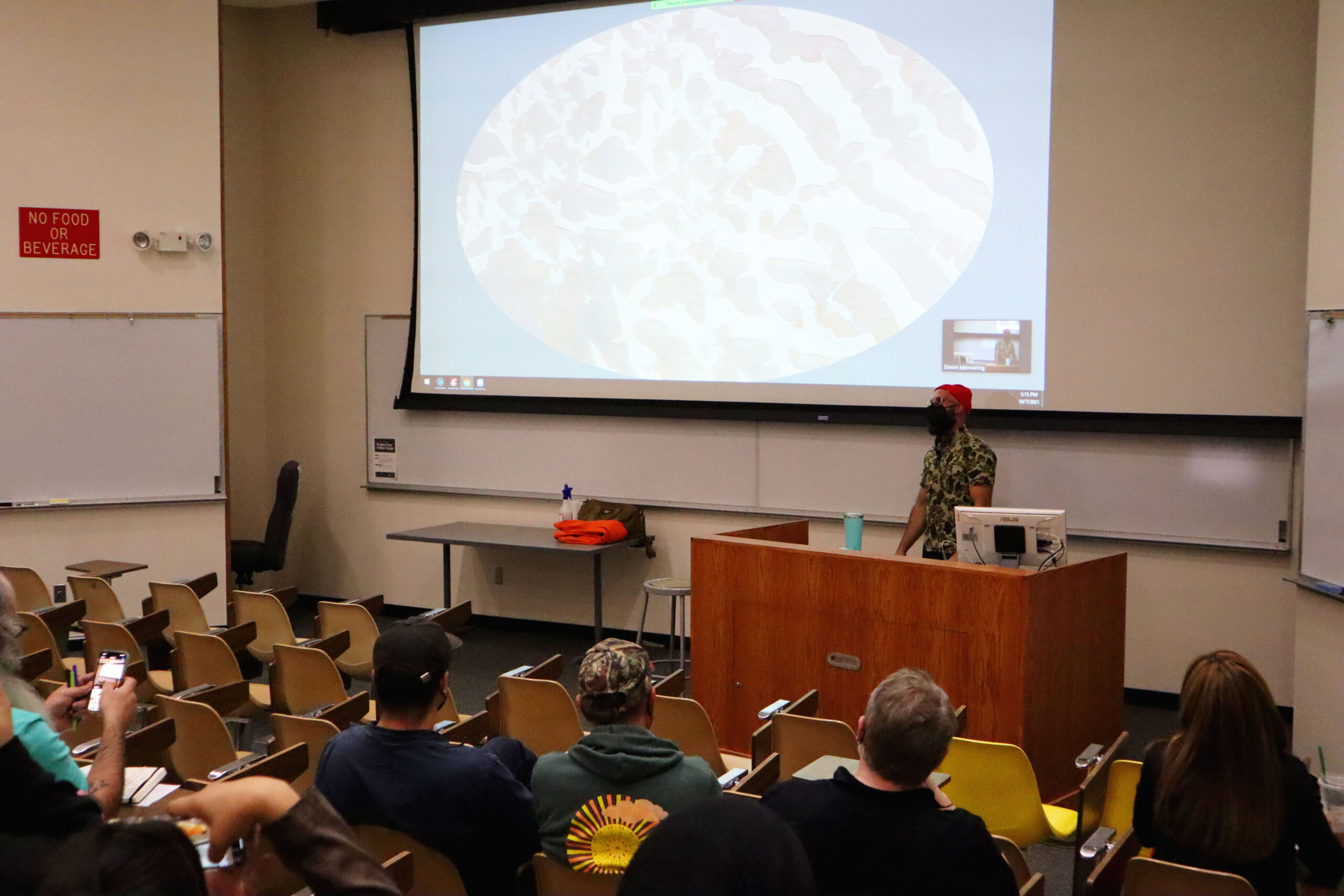 On October 7th, 2021 DTC faculty member Jacob Riddle presented an Artist Talk for the WSU Department of Fine Arts. The presentation delved into Jacob’s journey as an artist from more of a traditional photographer to his currnet interest in generative design.

Jacob started out with an anecdote about how he began to think about photos as information around 2010 or 2011, and made a hexadecimal file called .jpeg. This inspired him to start messing with what we do to photos such as jpegs and do it to a physical object, so he ran his file through a paper shredder. Jacob stated that this was still visual. He removed his JPEG from the code even further and ran it through text to speech software and created JPEG.mp3. At the time, text to speech was not as amazing as it is today, so it sounded a little odd. Afterwards, Jacob ran his file through a printer, which took three days.

Later on in 2012, Jacob started also thinking about Graphical User Interfaces (GUI) as a space that can explore photography. He started to reject traditional photography methods. He instead began to think about ways you can interact with User Interfaces (UI). He created screenshots and animated GIFS, including a program that watched da window just get stuck. He then dove into some video work, still dealing with UI, and created a buffer video to show how our constant connectedness has conditioned us to expect things. For example, the spinning wheel means “we wait” even though there is nothing to wait for.

While he was working on his Masters of Fine Arts (MFA) during the years 2014-2016, Jacob had also started learning 3D modelling. As time went on, Jacob also started thinking about software as a studio space and dove head in. He began to realize that there were similarities between the 3D modelling workspace and a photography studio. For example, in the 3D modelling workspace, there are lights, focus controls, moving cameras, and so on, such as in life. He created still life images. When people would ask if they were real, he would think “dreams are real, hallucinations are real,” as a rebuttal to the question. This is to prompt the realization that they are asking the wrong question. According to Jacob: “Real brings a value connotation with it that does not need to be there.”

Around 2017 or 2018, Jacob also bought a piece of purple drywall and tilted it in a way he could cut a hole inside that was still level, and could fit a painting inside. When you looked at it straight-on, you would realize what you thought was an object was an image after all. However, all of this felt too rigid and structured after a while, so Jacob wanted a change. Drones were being tested in his yard often, he would watch them in the sky with his camera and noticed the trees move. Inspired to simulate fluid motion and with a background dabbling in VR for a few years at this point, he had come across VR sculpting tools. These, he explained, were like spray-painting in a 3D space. He created gestural marks in this 3D space, recorded video for the background with drones, and also placed pillars in the foreground of his simulation. Afterwards, Jacob suspended a TV screen in a gallery from the ceiling so people could lay underneath it to watch it. However, due to this format, a lot of people did not view his work, he reflects. 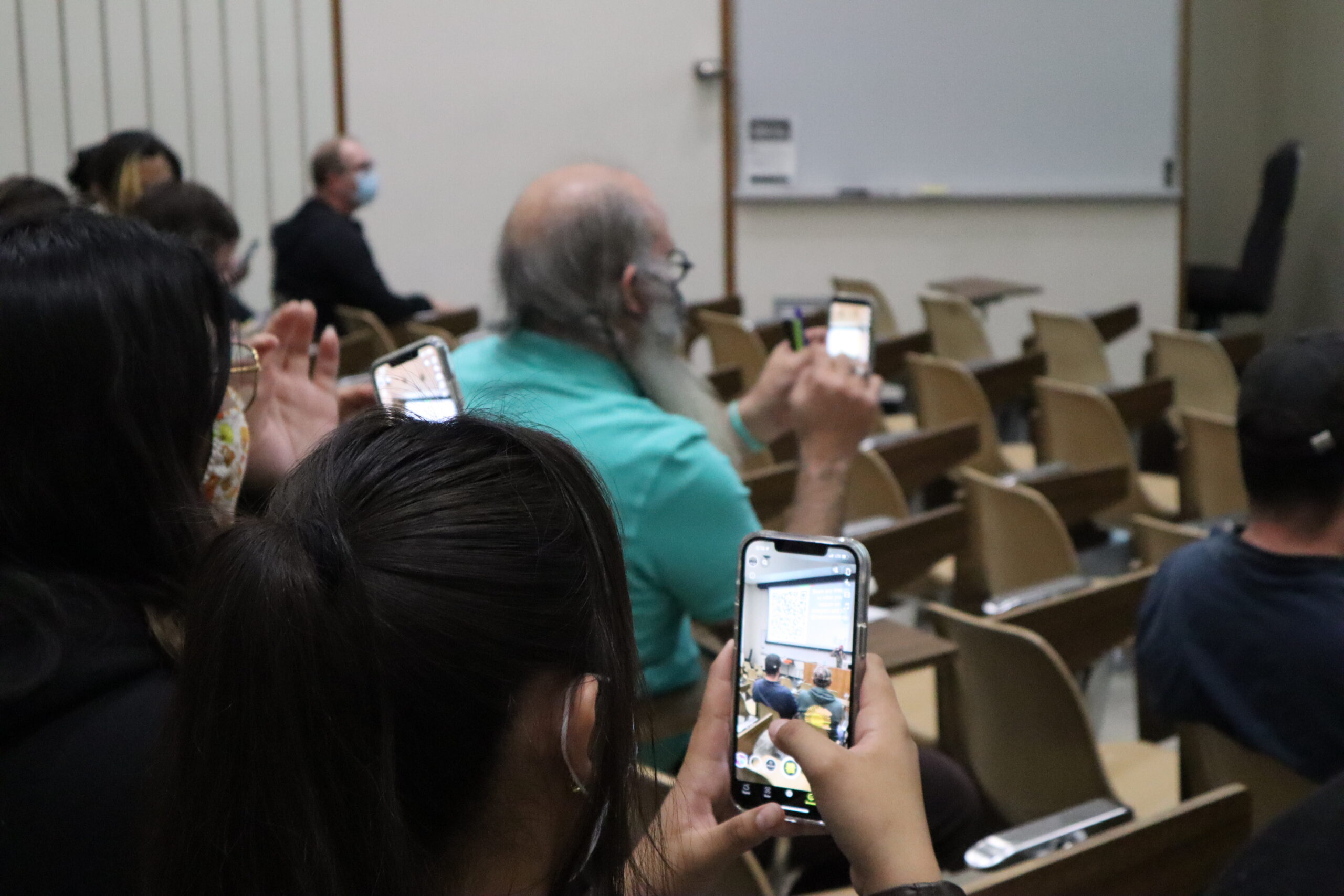 A separate work of art Jacob also created more recently (starting from late 2019 and is ongoing) was related to Disruptive Pattern Material; also known as camouflage. After researching the history of camouflage and becoming fascinated over its nature-imitating properties, Jacob fed a selection of camouflage from various places and time-points in history to an Artificial Intellegence (AI) program. This AI program; a GAN could be trained to learn the similarities between a group of images it is fed, and generate images it thinks it fits into that group. It also learns to select other images that it thinks belong in the same group. Using this, Jacob created a variety of camouflage patterns.

After researching more into generative design and playing around with that, Jacob found out about something called topology optimization (often wrongly referred to as generative design). Simultaneously learning about mushrooms and the complex connections between trees and mushrooms, he realized they felt networked like the internet. He started foraging for mushrooms and scanning them in 3D. Recently, he created a Snapchat filter that shows you various 3D scanned mushrooms in the space you are in. This is animated and cycles through various mushrooms. Jacob ended his talk by showing the crowd how to use his snapchat filter.

Jacob Riddle’s work can be viewed on his website.