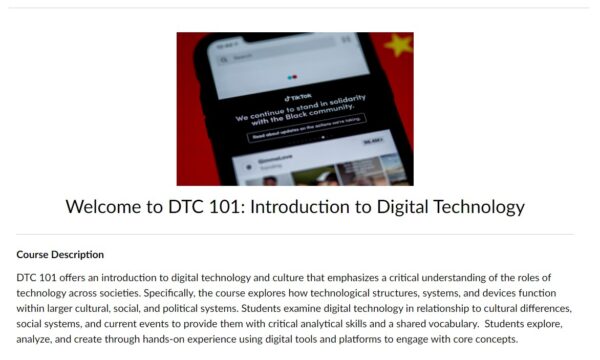 Nazua Idris spoke about the social and racial justice focus that was used in the Fall 2020 version of DTC 101 at the English Graduate Organization (EGO) Colloquium on February 24th, 2021. Every semester at the EGO meetings there are several panels where the members invite faculty and graduate students to speak about a particular topic. The theme this year was Social Justice Pedagogy.

Idris, Elle Fournier, Ruth Gregory, and Kathryn Manis collaborated on the Fall 2020 DTC 101 syllabi after Derek Chauvin, a Minneapolis police officer knelt on a man’s neck until he died in May 2020. George Floyd’s death ignited protests and calls for social justice all over the world, and even more so (albeit with less attention) after the death of Breonna Taylor, an African-American medical worker shot in her sleep during a botched raid on the wrong address. In the United States, racial and social inequality, especially in the relation to police brutality are a common tale and the DTC 101 instructors wanted to connect the Black Lives Matter movement to digital technology.

After gathering the previous DTC 101 syllabi, Idris, Fournier, Gregory, and Manis decided that they would work together and revamp it to reflect contemporary issues with racial justice and technology. At the time, the Department of Digital Technology and Culture was also drafting their Black Lives Matter statement, which was also a source of inspiration for the thematic shift in 101. Idris worked on the Social Media module, Fournier worked on the Data Analysis module, Gregory worked on the Design Thinking and Social Justice essay, and Manis worked on the Digital Curation module.

The implementation of this class was not entirely free of hurdles, however. While designing the course went smoothly due to the variety of real time topics that were happening during Summer and Fall of 2020, these topics were still difficult, especially to first-year college students. In Indris’ class, she tried to create an environment where all would be free to share their ideas without feeling that their ideas were unpopular or did not matter. While some students did respectfully state that they felt targeted, Idris always made sure to ask “What could we have said or done differently in order to not make you feel this way?” Feedback was regularly requested as well, and any feedback that was received went into updating the course in order to make it more inclusive so that nobody would feel targeted or left out.

Manis had a good point when speaking on this topic: “As teachers, it isn’t our imperative to persuade anyone about any particular political views, and we unfortunately live in a moment where questions about equity have become heavily politicized. Discrimination isn’t a political issue, it’s a social one, and so it takes care to convey to students, some of whom may have experienced the kinds of inequities we’re discussing and many of whom haven’t, that there are important and meaningful conversations to be had surrounding DTC and social and racial justice.” Gregory noted that in several of the final essays for her section students mentioned that they had never heard the terms “social justice” or “racial justice.”

In Manis’ words, Social Justice Pedagogy “is an approach to teaching that intentionally highlights how the subject of study relates to questions and issues of equity. So, in that way, you’re not just learning about the subject, but you’re also learning about how that subject (in this case, an introduction to Digital Technology and Culture) works in a broader cultural context that includes inequity, bias, and discrimination.” As Fournier said, “Technology is always political at some level. It’s important to understand that tension, but also to find ways to move forward.”

During the first week of class, students read an article by Peggy McIntosh about the privileges she has as a white woman has called “Unpacking the Invisible Knapsack.” The article was turned into a survey with yes or no questions to help students understand their own privilege. Many students came to realize that there are things they did not personally consider a privilege – like having a wide variety of band aids that matched their skin color or being able to be around people of their race most of the time – were not afforded to all racial groups. Another project example that Fournier mentioned involves asking students to investigate Google search results surrounding groups that they identify with inspired by “Algorithms of Oppression” by Safiya Noble. In this project they can see how search engine algorithms can narrate identities and deconstruct how that happens.

There was also an interesting project that Manis designed whereby students were able to create their own digital exhibition with the goal of getting students to think about how they select artifacts for exhibitions and archives and describe and contextualize them. These objects tell stories about whose histories, voices, and perspectives are valued, and what biases are deeply ingrained in our society. The project was inspired by Fred Wilson’s “Mining the Museum” piece of curatorial activism and included recommendations for archival description from Archives for Black Lives. It also asks students to think critically about the presumed objectivity of a museum, an archive, or a digital history. Manis even shot a video with Mark O’English and Gale O’Hara (who are librarians in the Museum Archives and Special Collections – MASC) called “Visit to the Archives”  in which they recontextualized some of the artifacts in the archives that brought the issues of social and racial justice closer to home for the students.

Overall, the Fall 2020 DTC 101 syllabus is greatly helpful in informing new students of the issues within Social and Racial Justice and technology that define the entirity of the DTC department. Many students greatly appreciated the course content, and the opportunity to talk about subjects they may not have focused on in past classes or high school. Idris notes that it was also great cooperating with her colleagues from different research areas as they all brought different expertise and perspectives into building the course, which also made it more diverse.