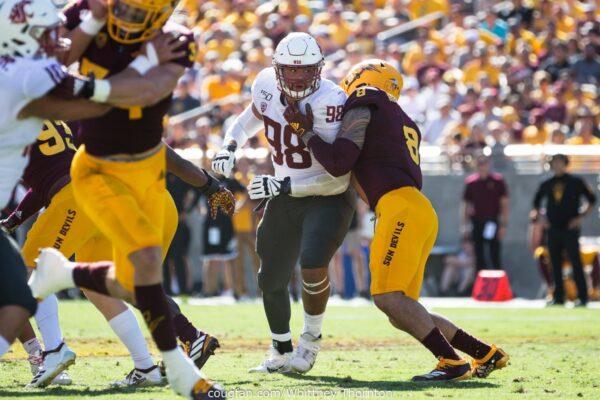 Over summer 2020, Digital Technology and Culture senior and Washington State University football player, Dallas Hobbs made waves nationally as student-athletes started asking questions about the safety protocols the National Collegiate Athletics Association (NCAA) and individual schools had in place for sports during the COVID-19 pandemic. The questions about the health and safety of the players then spurred additional conversation about student-athlete rights and the responsibilities of the NCAA and college athletic departments towards their participants.

Around July 1st, after training had begun for the 2020 football season, Dallas was contacted by Dylan Boles, a former football colleague from Dallas’ home state of Iowa who plays for Stanford. He wanted to know what WSU was doing to protect the safety of football players against contracting coronavirus; especially since football is such a high contact sport. Together they started reaching out to other players they knew across the nation to see what protocols were in place in their programs to ensure their health and safety. Large discrepancies immediately emerged and it became apparent that there was no uniform plan in place to protect athletes. 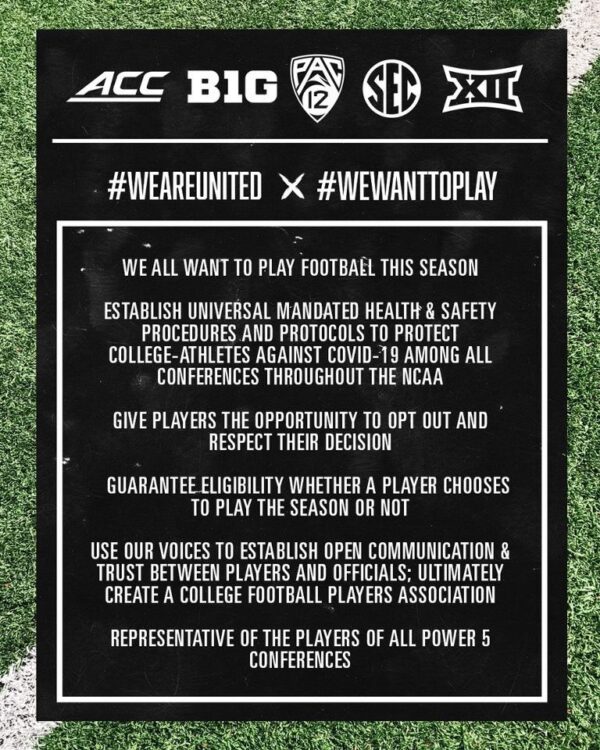 Simultaneously, players on two seemingly different sides of the issue started expressing their feelings and concerns about the upcoming Fall 2020 season via social media. One group wanted to play (and used hashtag #wewanttoplay) and the other wanted to sit the season out because they were concerned about their safety and the rapid spread of the virus (#weareunited). Dallas said that this was a false dichotomy. After discussion amongst the players, who were starting to talk more and more across programs behind-the-scenes, Dallas ended up creating a graphic that showed how the two sides were actually united at their core. The graphic spread like wildfire over social media to the point it was even retweeted by Donald Trump.

Since the release of the graphic, Dallas has emerged as a leader in the movement for student-athlete rights. He’s been interviewed by The Seattle TImes, NPR, profiled in Sports Illustrated, and appeared twice on ESPN “Outside the Lines.” He’s also been in contact with Senator Cory Booker from New Jersey. Dallas and several of his colleagues were asked to give feedback about their experiences as collegiate athletes; including proposed legislation that would allow them to make money off their name, image, and likeness. Currently, any money made off of jersey sales and other items linked to a player goes back to the school they play for or the NCAA. The College Bill of Rights, amongst other things, would allow players to earn money off their likeness. Booker is, himself, a former high school All-American and Stanford football player and understands the issues well.

Ultimately, Dallas and other collegiate football players want to create a College Football Players Association so they have representation at the table while big decisions are being made, like whether to play in a pandemic. This is not an unusual request, professional sports like the National Basketball Association and the National Football Association already have Players Associations. Creation of a Players Association was just one on a long list of requests that included things like: health insurance coverage up to 6 years after a player graduated and the promise of 6 years of scholarship funding so athletes had more time to finish their degrees since taking a full load during their athletic season is difficult and often delays graduation. One of their other requests is also important to Dallas: “End racial justice and inequity in college sports and society… Since the Pack-12 is a non-profit and they do have a lot of money coming in… we wanted them to give away like 2% of what they make to non-profit or community initiatives or after-school programs or something in lower income communities. That 2% could go a long way.”

Several conferences have decided to move forward with fall sports. However, on August 11, 2020 the Pac-12 CEO Group announced the cancelation of the 2020 football season as well as all sporting activity through the end of the year. That means WSU athletes will not be competing this Fall. The Big 10 conference has cancelled their fall sports as well. Football practice at WSU has been suspended.

However, the connections made during this time will live on. Dallas says that he and many college football players are now in a 450+ group member chat where they discuss a lot of things, including their love of football and desire to get back on the field when it is safe to do so again.

Dallas states that his time as a double major in the Department of Digital Technology and Culture and Fine Arts program at WSU prepared him well for the challenges of working with a wide variety of people to get out a clear message about their concerns. Aside from putting the graphic design skills he’s learned to use, Dallas also used his skills analyzing data that he picked up in DTC courses to make sense of the massive spreadsheets that the players were using to track peer responses to a survey. “We tracked what schools were wanting to participate and what schools were agreeing to things,” Dallas said, “[Data analysis] is not one thing that I ever really liked. My main goal was to get a graphic design degree. But the variety of courses in DTC is really helpful.”

Already an honor roll student and with the football season cancelled, Dallas now has a lot of time on his hands. To help fill his schedule, he has decided to buy a rug gun and start designing his own textiles. To check out more about Dallas Hobbs’ football career, creative work, and possibly some examples of his new hobby making rugs, you can follow him on Instagram or Twitter.