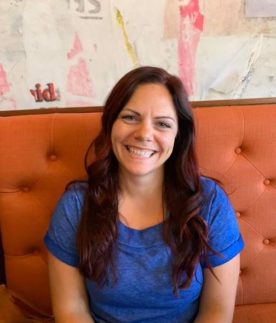 Jessica Meadows is a Digital Technology and Culture alumna with a passion for building and revamping web applications so they are accessible for everyone. After graduating from the DTC department in 2005 she continued working at the Distance Degree Program (now Academic Outreach and Innovation) while job searching. She then transitioned to a small startup company as a Technology Support Specialist before finding a job at the American Heart Association where she has been working and moving up the ladder for almost 14 years.

The American Heart Association is a nonprofit organization in the United States which educates consumers on living healthily, funds cardiovascular research, and tries to reduce the number of disabilities and deaths caused by strokes and cardiovascular diseases.

Working at the American Heart Association taught Jessica the importance of web accessibility, which she says is a standard that many websites fail to adhere to. Currently, she works with vendors and various business groups as an Application Analyst. Every day is different, so while sometimes she will be managing applications or running audits across their digital applications, other days she is pulled in as a resource on projects where there are gaps.

Originally, Jessica was in the MIS (Management Information Systems) program at WSU, but realised she did not want to be a developer and switched majors to DTC in her junior year, which she states is the best decision ever. While at WSU, Jessica was also part of the Digital Media Club and involved in extra curricular sports; her team even won the co-ed softball championship one year.

Outside of her work at the American Heart Association, Jessica has a personal project managing an Instagram account for her dog, Monte, whom she and her husband adopted three years ago.

Some advice that Jessica has for DTC students currently studying at WSU is to “listen, be empathetic, follow your passion, volunteer, utilize your friends, family, and professors for guidance and wisdom if unsure. They will support you.” An anecdote she also has for us is when she broke her finger playing basketball, and was told by a professor that she would never have a career with anything related to typing because her finger would not heal correctly. Jessica states “don’t listen to those that don’t build you up”.