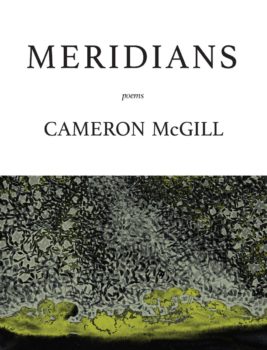 On February 1, Cameron McGill’s first book was published by Willow Springs Books. It is currently available through their website. Cameron is an instructor and Digital Technology and Culture faculty member, as well as a writer, musician, and the poetry editor of Blood Orange Review. His book, Meridians, is a small collection of poems. It is the tenth volume of the Acme Poem Company Surrealist Poetry Series. Cameron will be celebrating the book’s release with a reading on February 11 at Book People in Moscow, Idaho at 7pm. In preparation for the event, we got the opportunity to talk with Cameron about Meridians.

Cameron has been writing for a long time, but his focus has not always been poetry. Before starting graduate school, he worked as a musician for over fifteen years. He wrote songs and played in bands, releasing six albums and two EPs. Although Cameron is still working on music, his attention has somewhat shifted to poetry. Throughout his years of songwriting, his ideas that would not fit into songs started to accumulate. When he realized they were a different medium, it felt like a revelation. Once he began to shape his ideas into poems, poetry took over more of his writing time.

After finishing graduate school at the University of Idaho, Cameron started publishing his poems. He cites 2016 as the year of his first “real” publication. Many of the poems included in Meridians have been published previously, but some are new. The book’s title came about from considering different meanings of the word. It can be linked to line, the celestial sky, the human body, and more. Cameron has been referring to his poems as “meridians” long before releasing his book. Each poem within the category is titled with the latitude and longitude coordinates of a city or place.

One consistent theme throughout Meridians is the idea of revisiting locations to complete memories or better understand them. “It’s about trying to get at describing an emotional connection to certain places through memory,” said Cameron. Anchoring his poems to specific coordinates enables him to locate things very particularly while incorporating surrealism into his writing. His titles provide setting and context, and the poems in his book are cumulative. Looking through every poem from a location provides a clearer picture than trying to understand each one individually.

Cameron and fellow poet Michael McGriff will be reading poems at Book People in Moscow on February 11 at 7pm in honor of the release of Meridians. He hopes many people will be able to come and enjoy a night of poetry.