Anna Plemons Publishes Book on Progress in the Prison Classroom 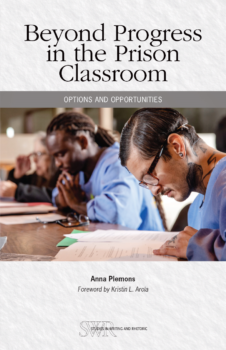 Dr. Anna Plemons has written a new book, a monograph titled Beyond Progress in the Prison Classroom: Options and Opportunities. The book is now up for sale through the NCTE catalog, and it first became available in November 2019. Anna has held a grant-funded teaching position with the California Arts in Corrections program since 2009, and she is also a longtime member of the Digital Technology and Culture faculty.

The Arts in Corrections program is a partnership between the California Department of Corrections and Rehabilitation and the California Arts Council. It provides art instruction for incarcerated people in state adult correctional institutions. The program includes visual, literary, media, performing, cultural, folk and traditional arts.

Beyond Progress in the Prison Classroom: Options and Opportunities contains narrative selections from Anna and Arts in Corrections participants. It argues that, when viewed as a microcosm of the broader enterprise, the prison classroom highlights the way that composition and rhetoric as a discipline continues to make use of colonial ways of knowing and of being that work against the decolonial intentions of the field. Anna states:

In Beyond Progress in the Prison Classroom: Options and Opportunities, I suggest that Indigenous scholarship provides a theoretical basis for studying and supporting something other than individualized, economic progress as well as design principles for research and pedagogy that respect and respond to the desire of many incarcerated people to contribute to communities outside the prison.

Anna has been working with the ideas in her book for over five years. The premise of her book grew out of her dissertation, which she finished in 2014. “The shape of the text has changed as my own thinking has changed and sharpened,” said Anna. She believes working with her book series editor also had a positive impact. He was open to including work by incarcerated writers, and well as some of Anna’s own creative nonfiction writing. He also suggested and facilitated the book’s final chapter: a conversation between Anna and two other scholars on the topics of whiteness, appropriation, and decolonial practice.

Over the last several decades, the Arts in Corrections program has been a powerful force for creativity and positivity in the California prison system. Anna aims to recount the program’s story through her book. She also hopes to see more writing by incarcerated people published. “I want to see writing that challenges stereotypes and illuminates the complicated ways that people who are incarcerated engage in relationships with each other and people on the outside,” said Anna. In addition, she intends to be part of a conversation that expands the options for teaching and research in prison.