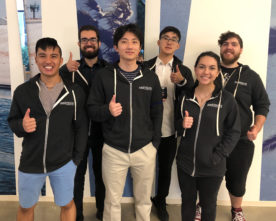 Digital Technology and Culture graduate Kira Norman recently landed a job at Airstrafe Interactive, a small indie game studio located in Los Angeles. As Gameplay and Narrative Designer for the company, Kira writes and implements scripts for the narrative elements of the studio’s games. She is also part of the 2D art team and occasionally works on sprites and character design.

Kira graduated from the DTC program in Spring 2019. She chose to major in DTC during her sophomore year at WSU after seeing the diverse range of classes and branches of study she could pursue through the program. She was especially interested in learning about animation. One of Kira’s animations, Witch’s Brew, was featured in the 2017 DTC Showcase. In addition to her work in college, Kira has been creating digital art since high school.

Although Kira was not searching for a career in writing, she stumbled upon the job posting and decided it might be worth a shot. “I wanted to expand the pool of jobs I was applying for,” Kira said. Even though it did not have anything to do with graphic design, she liked the idea of creative writing as a job. The hiring manager for Airstrafe Interactive was impressed by Kira’s webcomic, Crystal Magic, a personal project that she independently writes and illustrates.

When asked what part of her new job she is most excited about, Kira explained that she is looking forward to seeing her team expand. Airstrafe Interactive is currently made up of seven employees, and Kira is enthusiastic to watch the company grow. “We’re pretty small right now, but I hope we can hire on some more people soon!” she said.