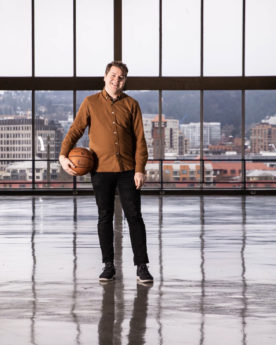 Digital Technology and Culture alumni Adam Ward has always had a passion for music and design. After graduating from the DTC program in 2013, Adam moved to Portland, Oregon. He is currently working as a Digital Content Specialist for the Portland Trail Blazers at Moda Center. Adam was able to chat with us about his career and experience in DTC during a visit to Pullman in late August.

Adam originally came to WSU to study journalism, but he was drawn to the DTC program for its connection to new media and its broader range of class options. Throughout his time at WSU, Adam was heavily involved with the student-run radio station KZUU, serving as DJ for five years and music director for four years. He also interned at the Museum of Art during his senior year.

As a Digital Content Specialist, Adam manages the social media accounts for Moda Center and their esports team Blazer5 Gaming. He is also part of the team that manages the social media accounts for the Portland Trail Blazers. He takes photographs, designs posts, edits videos, and in many ways acts as a jack of all trades. “My day-to-day is literally different every day,” said Adam. His current passion project is a social media campaign that bridges the gap between the mainstream stars that play at Moda Center and Portland’s local music community.

Like many creative professionals, Adam struggled with job hunting for his first few months out of college. Connections he made through KZUU gave him a head start, but he still had a hard time landing interviews while living in Pullman. After making the choice to move to Portland, his well-designed resume and hard work won him a job at Habitat for Humanity, where he stayed for three years before securing his current position.

Adam’s advice to DTC students is to get involved in extracurriculars outside of class. “My degree was obviously a huge help, but the extra stuff I did around it has helped equally with my career development,” said Adam. When it comes to DTC, he believes you get out what you put in. He took a wide range of classes and learned about everything from writing to graphic design. His involvement with KZUU was a major highlight of his college experience, and he encourages all students to find a job, club, or project on campus that they are genuinely excited about.