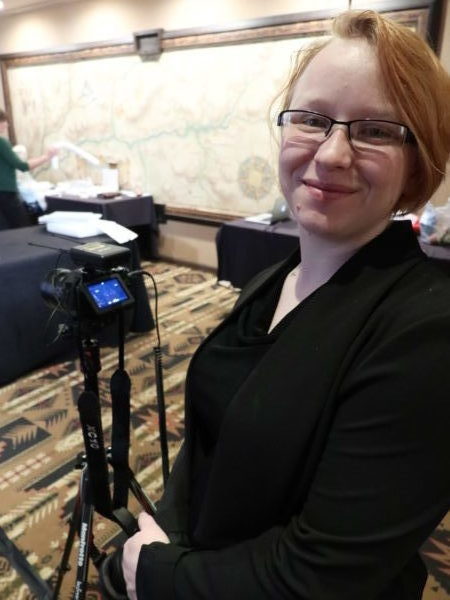 Kelly-anne discovered the DTC program on accident, “My friend Toya hyped up the program in a Fine Arts class we had together and said ‘You should give it a try.’ And then she just kept nagging me and nagging me to do it. The next semester I was the only freshman in Rebecca Goodrich DTC 354: Digital Storytelling class.”

While at WSU, Kelly-anne was a key member of the team of students, faculty, and staff who travelled to the Association of Tribal Archives Libraries and Museums conference in 2017 and 2018 to film tutorial videos centering on conservation and digitization methods of cultural artifacts for the Sustainable Heritage Network. Over the two years she worked on the project Kelly-anne and the team shot and edited around 60 videos. Kelly-anne states: “The internship was one of my most memorable experiences at WSU. I got to do things I never thought I’d do.” In addition, Kelly-anne’s first trip to the conference entailed riding on a plane for only the second time in her life.

Kelly-anne was also an integral part of the set up of a new multimedia production space in Avery Hall called the Creativity Suite. As a Lab Aide, she provided helpful, cheerful, and compassionate support to anyone who needed assistance. In addition to her on-campus job, Kelly-anne worked another job off-campus to keep the cost of her education down; frequently putting in 20 – 40 hours a week between the two positions. Kelly-anne plays the french horn and was active in the Music Department throughout her time at WSU. She was also a member of both the Digital Media Club and the Bowling Club.

As if one major, two jobs, and an array of school activities wasn’t enough, Kelly-anne was also a double major earning a degree in Strategic Communication concurrently with her Bachelor of Arts degree in Digital Technology and Culture.

Although Kelly-anne does not know exactly where life after WSU will take her, she would love to work to bring inclusion of minority groups into the mainstream media, especially those in the LGBTQi+ community. She says that: “I want to find work that I am passionate about that will help to make others lives better.”

The DTC faculty stated in their nomination letter about Kelly-anne: “We know that her determination and willingness to try new things will serve her well wherever she goes in the future.”

Congratulations Kelly-anne! We can’t wait to hear about all your adventures in the future.