DTC Director, Kim Christen, kicked off the 2019 Digital Technology and Culture Awards ceremony with some words about the purpose of the program:

The mission of the DTC program is to emphasize creative production and critical exploration of digital technology across multiple contexts.

Through our classes and service work we encourage creative research, scholarship, and production that invites critical perspectives, integrates diverse knowledge systems, and encompasses progressive and innovative uses of technology…

All of these awards and the arc of the DTC curriculum reflect our commitment to ensuring that DTC provides a place where you can integrate your creative and professional goals with critical thinking and an understanding of the cultural, social and political stakes of that work with and through technology and digital media.

Award winners who embodied specific parts of the DTC Mission were honored with medallions designed by Kyle Mentele and certificates. 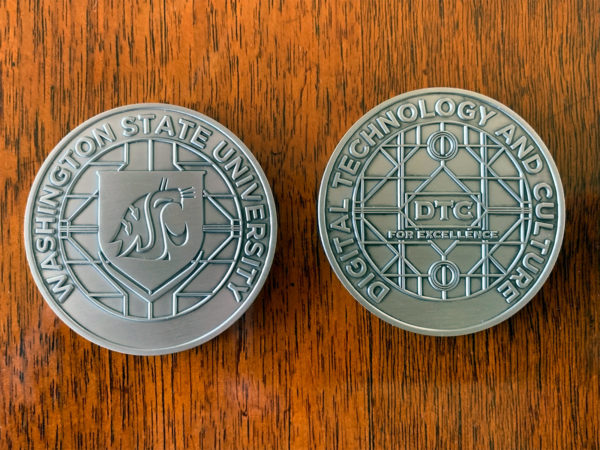 For Excellence in Graduate Scholarship
Presented by: Kim Christen
Lacy Hope has done outstanding and cutting-edge scholarly work in the DTC graduate seminars she’s taken, focusing on public rhetoric and composition, algorithmic rhetoric, and the capitalistic practices of social media sites. That work has contributed to her in-progress dissertation investigating the intersections of personalizing algorithms, democratic discourse, and social media incivility, and led to presentations at national academic conferences and publications and has contributed to her outreach and engagement with diverse communities specifically when she was a graduate assistant at the Center for Digital Scholarship and Curation.

For Excellence in Instructor Pedagogy
Presented by: Ruth Gregory
Rachel did one of the hardest things you can do – take on the role of student and teacher at the same time. Over the past year and a half Rachel has been the preceptor (aka instructor) for English 300: Computers in English which covers some of the basics of the Adobe Suite focusing on text-based applications. Rachel’s supervisor, Leah Wilson, had this to say about her performance: “Rachel has been great to have as a TA for English 300–she is independent, creative, and reliable–I never have to worry about her staying on top of the class and what it requires, and she does the job well. We’re going to miss her. Honestly, I (and past AML Assistant Directors as well) have had to be more hands on with the undergrad English 300 TAs in the past (like making sure that they actually show up and have lesson plans), but with Rachel there was never any concern and I was always confident that she was doing an excellent job.” 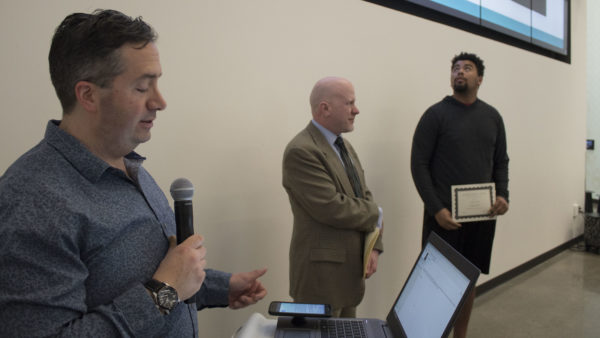 Emerging Scholar Award
Presented by: Tor De Vries
Dallas Hobbs was chosen as an Emerging Scholar for his projects for DTC 336, 356, and beyond. He is consistently engaged with course topics, and often finds creative ways of combining course material with his own approaches. He demonstrates curiosity, critical thinking, and a sense of humor. 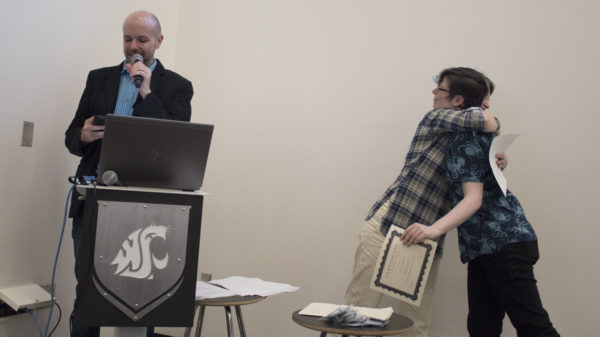 For Excellence in Digital Cinema, Sound, and Animation
Presented by: Suzanne Anderson
This award is not about one piece of work, but a body of work that Jeff has amassed working for campus and community clients over the past year. Since May 2018 he’s created videos for Viva Farms, the WSU Libraries, and the NextGen project. He’s also worked on the Advanced Animation class’ collaboration with the Coeur D’Alene tribe. In addition to all this, Jeff has been instrumental in the creation of over 80 tutorial videos for the Center for Digital Scholarship and curation over the past two years. Production of these videos happened in October in New Mexico in 2017 and Minnesota in 2018 and post-production for the videos continued on for the rest of each school year. It was a massive project and a large portion of its success can be attributed to Jeff’s many contributions. Jeff’s always willing to try new things and help out on projects. And has often been the go-to person in DTC for audio sweetening and digital music creation. 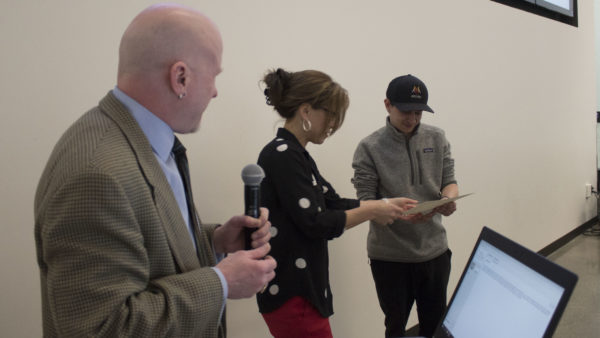 For Excellence in Information Structures and Systems
Presented by: Mike Edwards
Nico successfully integrated perspectives on problems of digital privacy into a real-world document genre entirely appropriate to such a project: the judicial brief Amicus Curiae. Nico’s research shows a deep engagement with the information structures and legal quandaries associated with digital privacy. The document creatively uses the multimodal affordances of typography and information design and shows how form and genre can make arguments in addition to the textual meaning they communicate.

For Excellence in Interactive Technology and Design
Presented by: Ruth Gregory
For the final assignment in the spring 2018 version of DTC 475: Digital Diversity, students were placed into small groups and asked to create a game that addressed an intersectional issue. Kimberle’ Crenshaw defines “intersectionality” as the unique issues faced by people with overlapping oppressed identities. Evie Caldwell pitched the video game idea – D.L.S – to the class and it was instantly one of the top projects that her peers wanted to work on. After it was completed, D.L.S. was praised for its sleek design and the impactful twist ending that focused on the plight of gay women in media. Dead Lesbian Syndrome, as it is known, is the result of gay women dying at an alarming rate compared to their peers. In the credits of the game the group noted that: “In the 2015-2016 television season, LGBTQ+ women made up 2% of characters and 10% of deaths.” As we talk about in DTC, representation matters, and it is difficult to see people you identify with be killed off in the media you love. So I’m proud to give out this award to this group as their work is shining a light on an issue that needs more attention. You can play DLS at eviesmedia.com/dls.

For Excellence in Collaboration
Presented by: Ruth Gregory
In DTC 478: Usability and Interface Design the team of Daniel Kim, Riley Cagle, Brandon Sanders, Dave Herman, and Kameryn Skillingstad created a website for the Pullman Schools Pantry program. Like many of the community partners that we work with in DTC, the Pantry is run by an all-volunteer crew with limited time and limited technical knowledge. The student group worked diligently with multiple volunteers at the Pantry to assess their needs for a site and used sister websites to do their usability testing. The students also kept the project going after the semester ended by offering their technical and instructional skills to the Pullman Schools Pantry volunteers. This extra, non-required step, enabled the Pantry group to focus on providing solutions for food insecurity in the area instead of spending their limited time on fighting technical issues and helped them to finally push their site live in April 2019, four months after their formal class work has ended. 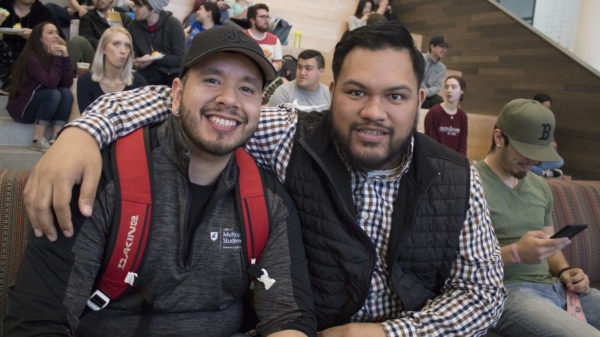 For Excellence in Diversity & Inclusion
Presented by: Ruth Gregory
Bryan Duran has been a Team Leader for the CASHE (Children of Aztlan Sharing Higher Education) & SHAPING (Shaping High School Asian Pacific Islanders for the Next Generation) conferences at WSU. The focus of these conferences is to mentor multicultural high school students looking to pursue higher education opportunities. Over 200 high school students from all over the state of Washington attend these conferences per year. Bryan’s supervisor, Dominique J. Faga’autau, had this to say about Bryan’s contributions: “Bryan Duran has been one of my best student employees that I have had over the last 5 years. He has been working with the Office of Multicultural Student Services for the last 2 years and has helped us maximize our offices fullest production. He has helped plan our student recognitions, fall and spring multicultural graduation as well as helped with our hiring process and trainings. He even started to learn how to work on our websites and social media outreach. He is one of our outstanding students and it is with pleasure that I support him to receive an award like this.”

Grit Award
Presented by: Ruth Gregory
Pedro is from a small town called Bridgeport, WA with a population of about 2500 people. Pedro was the first of his family to attend a university. Pedro started out his college career studying to be a Civil Engineer but his passion for design, art, and technology lead him to switch majors to DTC and Fine Arts. After switching majors Pedro had to take a couple years off from school full time due to financial issues.  For three years Pedro worked full time as a night shift janitor at Lighty/ French Ad for WSU and with that was able to take one to two classes per semester with the full time employee tuition waiver until he saved up enough money to be able to come back as a full time student. After returning to WSU full time Pedro continued that drive and involvement with the community. Pedro at this time had finally discovered who he was as an individual, coming out as gay to his family and friends and riding the emotional roller coaster of finally have to courage to be who he was. Pedro graduated in December of 2018 – eight years after he started at WSU – and right after the new year was offered a position with Nintendo of America in Redmond WA as a JR Debug Tester where he gets to essentially play video games all day! ok not all day. In a team of other testers he works on up and coming Nintendo games (that he can’t reveal due to an NDA contract), He has meetings to attend, emails that need to be sent out and replied to, bugs to report and regress, and all of the other stuff you would assume someone in a normal office job would need to do, except it’s at Nintendo! Pedro is already working on the steps to become a SR Debug Tester.

Congratulations to everyone who won an award this year!