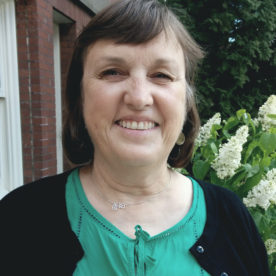 Leisa first moved to Pullman in 1987 to pursue educational opportunities for herself and her husband, Craig. She graduated from the University of Idaho in 1993 with a Bachelor of Arts (BA) in English literature and in 2002 with an Master of Arts (MA) in English.

Before becoming an advisor for the Department of English, Leisa worked for the Pullman School District for 10 years as the case manager for Eclipse, Pullman’s alternative high school. Eclipse was established in 1993 with a goal of meeting the needs of students at risk for dropping out; high school students with children to care for or work schedules that conflicted with school satisfied their diploma requirements through courses offered by the Eclipse program. As the case manager for Eclipse, Leisa advised at-risk students and helped them succeed at the alternative high school. While working for the Pullman School District, Leisa completed her secondary teaching certificate.

In January 2010, Leisa was hired as the advisor for the Department of English, where she advises students pursuing degrees in English and Digital Technology and Culture.

The WSU Academic Advising Association is the primary organized group of professional and faculty advisors and student support personnel at WSU. Each year since it began in 2009, the WSU Academic Advising Association has recognized the outstanding work of its members through a competitive awards program. The organization recognizes award recipients for their exceptional work with students and contributions to the field of academic advising. Leisa earned the Outstanding Achievement in Academic Advising award in the “primary role” category. The award is granted to an individual whose primary role at WSU is the direct delivery of academic advising services to students.