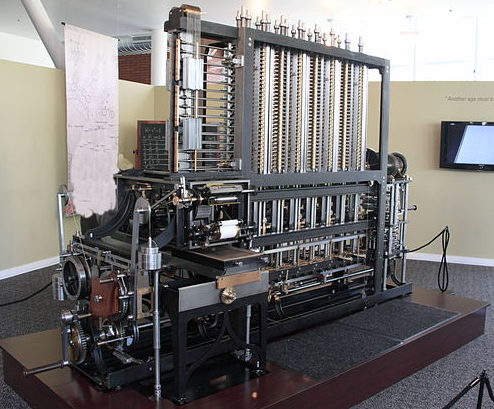 Digital Technology and Culture Assistant Professor Roger Whitson recently published an article on the nineteenth-century calculator called “the difference engine” (featured in the image above). The article was published in the online journal BRANCH: Britain, Representation, and Nineteenth-Century History, and it epitomizes Whitson’s scholarly interest in historical technologies.

The difference engine was designed in 1822 by the British industrialist and engineer Charles Babbage. The machine uses the mathematical principle of “divided differences” to figure out the shortest line between two points, originally to make it easier for commercial shippers to navigate the oceans around Britain. Babbage held a lifelong obsession with making his workers more efficient and extracting more value from the time they spent at work. Professor Whitson’s article shows how Babbage attempted to realize this dream in the construction of the difference engine. Unfortunately, despite repeated attempts by Babbage and by other engineers in the nineteenth century, the machine proved to be much too expensive and difficult to produce. Even when a model of Babbage’s machine was successfully constructed in 2002 by the London Science Museum, it took 17 years to build, cost several times what was initially estimated, and suffered from numerous catastrophes. The electronic computer wouldn’t be invented until 1946, when the United States built the ENIAC (Electronic Numerical Integrator and Computer) to calculate the arc of artillery fire and to test the feasibility of detonating a nuclear warhead.

As editor Dino Franco Felluga on the “About” page states, the journal BRANCH “provides users with a free, expansive, searchable, peer-reviewed, copy-edited, easy-to-use overview of the period 1775-1925.” Its articles are intended for scholars as well as students and general audiences, and includes topics as varied as the Victorian post office, Charles Darwin’s evolutionary interest in earthworms, and the discovery of hyperspace. Whitson states that historical technologies like the difference engine are important objects of study for DTC students. “We often think of technology as something that is new,” Whitson states, “but there’s a long history of how people interact with technology. If we want to understand how current technologies are changing us, we should look at how they changed people in the past.”